From homeless to C-suite 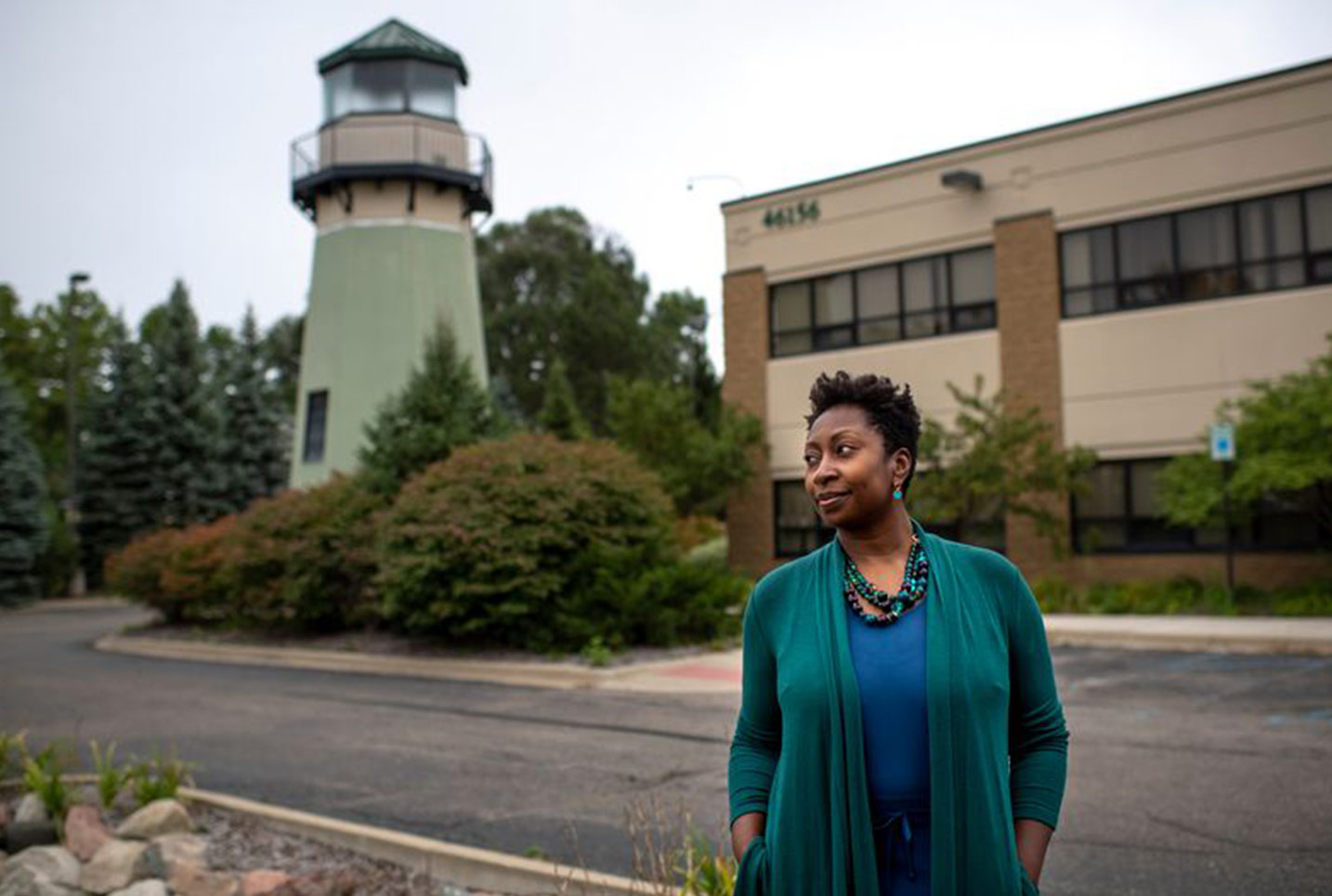 On her own and pregnant at age 18, Rita Fields was sleeping behind the Kroger at 13 Mile and Woodward in Royal Oak when she first heard about South Oakland Shelter.

She'd dropped out of high school, run away from an abusive mother and her Detroit home before winding up on the streets with her boyfriend when the money for hotels in Oakland County ran out.

She was about seven months pregnant when she and her boyfriend learned of the rotating shelter SOS coordinated in area churches and sought help.

It would be her first tour at SOS — which now operates as Lighthouse — but not her last.

In late August, after serving as a board member at two different points, 47-year-old Fields returned to SOS 29 years after her first visit to join its executive team and help others get the same help she did.

"Even now, it's intensely personal for me," Fields said. "I remember what it was like to be in the shelter; the first meal with sloppy Joes, I couldn't eat it because I hadn't eaten for a week."

"To me it feels like all the work I did, all of the consulting, all of the insight, all of the giving back to the community as much as I could, the teaching, all prepared me to be perfectly aligned with what this organization (Lighthouse) needs at this time."

It was 1991. Fields was able to remain in the rotating shelter for a month, the limit for the program at the time. She'd planned to return to the spot where she slept behind the grocery store and the nearby park, which were walking distance to William Beaumont Hospital, when she went into labor.

"One of the case workers at the time was pretty blunt. She told me I couldn't be homeless and have a baby," Fields said. "I realized I didn't have a choice. I had to go back to my mother, so I did it."

But she was intent on doing things differently with her child. After giving birth that September, she returned to Highland Park High School and completed her entire senior year by December, earning her high school diploma. She was on welfare and still living with her mother, neither of which were pleasant experiences, she said. "But I had this human being who was reliant on me," she said.

Her son's father left when the boy was 2 weeks old.

She didn't know anyone who had gone to college but thought an education might better prepare her to get off welfare, so she signed up at Marygrove College. As an enrolled student, her welfare assistance was cut. But she was able to get by through a federally funded work-study program and later a job at The Westin Hotel Renaissance Center (now Detroit Marriott at the Renaissance Center).

Her son, who was a year old when she entered Marygrove in September 1992, stayed with her mother in the beginning. But she started bringing him to class with her when he was 2, bribing him to behave with gummy bears.

"His favorite class was film class … maybe because there were movies and he had snacks," Fields said.

She and her son moved out of her mother's house for good when he was between 3 and 4 years old.

"I just couldn't do it anymore. It was a pretty intense situation. It wasn't safe for me or my son," she said.

She set a goal of completing college by the time her son was in elementary school and had to work extra hard to double major in psychology and English. In May 1996, she graduated from Marygrove with her undergraduate degree. Her son moved on to a classroom of his own that fall as he entered kindergarten. But the classroom experience there paled in comparison to class with his mom at Marygrove.

"He wanted to quit," Fields said, because there were no movies and no classroom discussions to capture his attention. "He wanted to go back to college. I had to tell him he was too short."

After graduating, Fields did temp work for a while, taking nine buses a day from McNichols Road in Detroit to jobs at the GM Tech Center in Warren and then Farmington Hills. Before work each day, she would drop off her son for full-day, private kindergarten that she paid for because other programs would only keep him for a half day.

"It would take me hours to get to work," Fields said. "I didn't have a car because ... when you're in a situation where you have an abusive childhood ... you don't learn how to drive."

The "shocking" gift of a car from a colleague she'd helped land a job in Indiana prompted her to learn to drive when she was 22.

From there, Fields' career was like a train that just kept on going.

She got into full-time recruiter roles, starting at Covansys in 1997 and running through 2005-06 as a senior physician recruiter for Henry Ford Health System before moving into positions of increasing responsibility at the Detroit-based health system.

"I discovered I had a talent for connecting with people, but I didn't know what that meant," Fields said. "Having eaten from a garbage can, and being homeless and being in situations that were dire, I don't get intimidated by people with a title.

"When you have that perspective, it wasn't difficult for me to talk with people and it still isn't, which is great."

Over the next eight years, between 2003 and 2011, Fields rose from director of workforce diversity and affirmative action/equal employment opportunity compliance at Henry Ford to vice president of human resources at Henry Ford West Bloomfield Hospital, where she helped develop the workforce strategy for the hospital.

She held the same role at McLaren Health for two more years before she decided to change career tracks.

One of the things she learned when she quit working a regular job was that she needed intellectual stimulation. "I found that consulting and teaching ... scratched different parts of my brain," Fields said.

She launched Copper Phoenix Consulting LLC in 2013 to provide talent and operations management expertise. The Washington, D.C.-based National Immigration Forum was a client for four years through 2019. In between, she joined Mosaic Youth Theatre of Detroit as executive vice president from 2015-17 and started defense contractor 313 Industries with her husband at the end of 2016, the same year they were married.

She also joined the boards of nonprofits, including the Coalition on Temporary Shelter in Detroit, Sinai Grace Hospital and South Oakland Shelter (now Lighthouse) first in 2002 before taking a break and returning in 2011.

"I felt compelled to start to programmatically give back to the community," Fields said. "Teaching helped me do that in one way, and serving on nonprofit boards helped me fulfill that in another way."

As a board member at SOS, Fields forged a close relationship with CEO Ryan Hertz. He would call her if he needed to vet human resource issues or bounce other business concerns off her.

"I recognized early on he had the goods; he cared about the people, the organization," Fields said.

When Lighthouse's former chief administrative officer left after helping merge South Oakland Shelter and Lighthouse over the past year, Hertz and Fields began spit-balling what that position might look like going forward.

With its shift to focusing on a talent development strategy, Fields became an ideal candidate for the new chief talent and strategy officer role, Hertz said. But he still put her through five rounds of interviews before she was invited to join the executive team to make sure her appointment made sense to the Lighthouse teams that would utilize her expertise.

Fields "has both the lived experience of being a client of our organization ... but more importantly ... she has an incredible career with significant success in the areas we need," Hertz said.

She joined the executive team at Lighthouse in late August, bringing her personal and professional experiences to bear. She's honored, she said, "to be a voice among our clients in terms of expressing what their true needs (are)."

The experience Fields gained with people and organizational systems, the knowledge she'd gained about the important of culture, her role as a trusted adviser to CEOs over the years and experience in launching companies have enabled her to walk into the role at Lighthouse with a high level of preparedness, she said.

"I feel like if I didn't have all of that I would find this role to be overwhelming. Lighthouse is a major player, and we're in the middle of a pandemic, which makes our work even more critical."

Typically there are 30 homeless people in the rotating shelter coordinated by Lighthouse. Currently, Lighthouse is providing shelter for 100 people through "hoteling," or putting up people who need shelter in local hotels, Hertz said, along with increased food distribution and other emergency needs and supportive assistance, even as it develops affordable housing through a subsidiary.

As she takes on the new role at Lighthouse, Fields also joined the Marygrove Conservancy this summer as the first executive-in-residence of the new nonprofit incubator launched on its campus. There she is facilitating the incubator program, meeting with the nonprofits monthly and serving as a mentor for the leaders.

Her deep connections to the Marygrove campus along with her extensive leadership experience made her a natural choice, Racheal Allen, COO of the Marygrove Conservancy, said in an email. Nonprofits participating in the incubator "have already shared how her authentic leadership style and inspiring personal story is motivating them to be better leaders," Allen said.

SOS and Marygrove "were anchors in my life at a time I really didn't think I had any value whatsoever," Fields said.

"I'm so excited to be able to share the wisdom I've gleaned."